What is a Normande?

The Normande breed has its beginnings in the Normandy region of France. Sometime in the 18th Century farmers in Normandy began cross breeding three breeds of cattle (Cotentine, Augeronne, and Cauchoise) and the result was one homogeneous breed-the Normande. The Cotentine (red brindled hair coat) was described as a tall cow, heavier than normal, and above all, an excellent milk cow. The Augeronne breed (mottled white hair coat) was moderate in size and was known for its quality as beef cattle, smaller frame and easier to fatten than the Cotentine breed. The third breed in this cross was the Cauchoise (red pied coat with a dash of Flemish blood). The distinguishing feature of this breed was its white or almost entirely white head (at least 2/3’s).

In 1836, and for about forty years after that, some Normande breeders sparingly introduced Shorthorn blood into the breed with the goal of producing animals that developed earlier, were less coarse, and fattened more readily. However it appears the Cotentine breed was the major contributor to the development of the Normande breed. 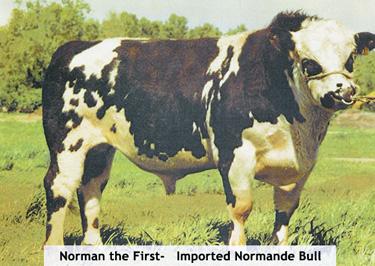 In 1883, breeders of these unique cattle established a Pedigree Book and created the Normande Herd Book to record the pedigrees and register the parentage of Normande cattle.

It was beef farmers who initially utilized the Normande genetics brought into the United States in the early 1970’s. And for nearly 20 years the focus of American Normande breeders was on beef production.

In 1994 the first importation of Normande semen from France in over 20 years was accomplished and in 1995 semen from the top French bulls was made available to dairy and beef farmers in the United States. Dairy producers, especially those grazing their herds and those who were crossbreeding their dairy herds, became interested in the Normande breed because of their high milk components and reputation as good grazers.

The combination of the three ancient breeds of cattle resulted in a unique tri-colored hair coat. A Normande animal is usually red and white with occasional widespread areas of brown hair. Typically, the brown hair has the look of tiger stripes or brindles, interspersed with the red spots. There is some degree of balance between the three different colors; however, often time’s one color dominates. Besides the tri-colored hair coat Normandes usually have a white head with pigmentation and dark hair around the eyes and on the muzzle. 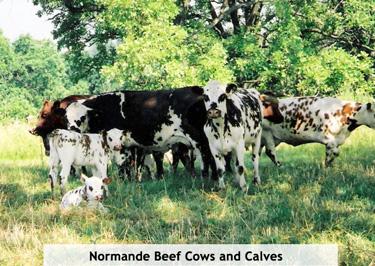 The Normande breed was developed on the pastures of northwestern France in the province of Normandy (Remember the Normandy beaches of World War II on D-Day.). Having been raised on rough forages the Normande has become well known for profitable dairy and beef production. Normande breeders have preserved hardiness, fertility, calving ease, sound feet and leg conformation, efficient feed conversion and genetic diversity within the breed. The consequence has been a breed that is adaptable to a wide range of climates. The presence of Normandes in the high plateaus of the Andes, in the tropics, in Brazil, Europe, the far east, Africa and North America has verified and proven the Normandes’ adaptability.

For dairy producers, Normande cows fed a high forage grazing ration will average between 14,000-18,000 pounds of milk per lactation with 3.6% protein and 4.4% butterfat. Normande cows fed a conventional TMR ration produce 22,000-30,000 pounds of milk with similar protein and fat content. In France, Normande dairy cows are associated with the production of famous French specialty cheeses. More than 90% of the Normandes carry the B Kappa Casein gene. The levels of casein beta and kappa in the milk are known to improve the curdling quality of the milk for the making of cheese. 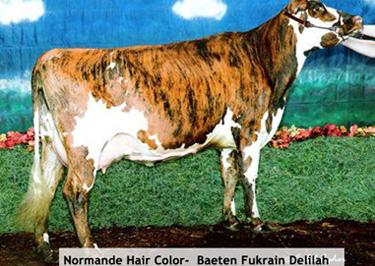 For beef producers, Normandes have become known for their high quality carcasses and tasty meat. The average 1250 pound Normande steer has a quality grade of 90% low choice or higher, 765 pound hot carcass weight, 13.5 in. ribeye area, 0.25 in. back fat, 2.0% KPH fat and a 2.2 yield grade score. These average carcass trait values have been well documented by results from the Great Western Beef Expo Steer Test in Colorado, the World Beef Expo Fed Steer Futurity in Wisconsin, the Montana Steer of Merit Program in Montana, and other carcass contests. Currently a Wisconsin breeder is gathering carcass data on each individual animal from their herd that is slaughtered as a fat animal and the resulting carcass data is confirming the above mentioned averages.

Well known for its low back fat and good marbling ability the Normande’s meat sells at a premium in French supermarkets under the label of Normande Beef. And in blind palatability tests in France, Normande beef has placed first for taste and tenderness over other breeds of cattle.

With the documented ability to produce profitable volumes of high component milk ideal for the making of cheeses; and with documented high quality carcass traits the Normande is truly an all purpose breed for both the dairy producer and the beef producer.